The manuscripts of Edmund Nicholas Gabriel (1800-64)

We highlight some of the manuscripts held in our collection that belonged to Edmund Nicholas Gabriel, who was the first Secretary of the RCVS from 1844-1861. 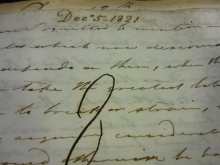 The most important of the manuscripts is a collection of, almost verbatim, notes taken by Gabriel, whilst he was a student at the London Veterinary College.  The loose leaf notes are of seventy seven lectures given by Professor Edward Coleman between 1821-22 and cover a variety of topics relating to the horse.  Click on the photo above to view an enlarged version.

“[that they] must have been made without Coleman’s’ knowledge; he openly indicated the offence it would give him if his lectures were published, and he rigidly excluded reporters”⊃1;

Smith then goes on to reproduce almost five pages of extracts from the notes including the following:

“bots produce no mischief; it is most unlikely that such an insignificant creature should be permitted by nature to destroy so noble an animal as the horse.”⊃2;

which he uses to illustrate his view that they

“show how limited was his [Coleman’s] knowledge of the most common, acute and fatal diseases of the horse."⊃3;

Other manuscripts by Gabriel in the Collection are:

All of these manuscripts are written in Gabriel’s spidery, slightly illegible, handwriting which can also be seen in the early minute books of the RCVS where as Secretary he records the early deliberations of Council. 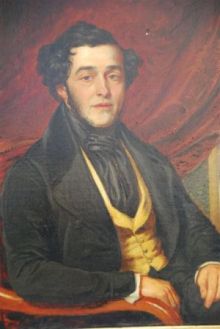 Gabriel’s obituary in The Veterinarian describes him as:

“active and energetic in mind, gentlemanly in his demeanour… respected most by those who knew him best."4

This portrait of Gabriel hangs on the wall of Belgravia House.

If you would like to view these, or any other item in the archives, please contact the Library at library@rcvstrust.org.uk or 020 7202 0752 to arrange an appointment.