First veterinary surgeon to be killed in WWI honoured 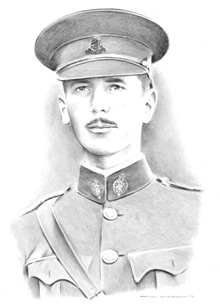 The first member of the RCVS to be killed in the First World War has been honoured with a portrait at our offices in Belgravia House - 100 years after his death.

The portrait of Lieutenant Vincent Fox, who was from Dundalk, Co Louth, and was an alumnus of the then Royal Veterinary College in Dublin, was presented by his great grand-nephew, James Tierney, and received by our Registrar Gordon Hockey (below right).

Lieutenant Fox, a member of the former Army Veterinary Corps (AVC), was killed in action by a shell on August 26 1914 during the Battle of Le Cateau in northern France in which British and French forces fought to impede a German advance. He is now buried in the nearby Commonwealth War Grave Cemetery at Caudry.

I am very pleased that the Royal College of Veterinary Surgeons has accepted this portrait as future generations of vets will be able to see it here and learn about my great grand-uncle’s story.

Paul Watkins, a veterinary surgeon and military historian, conducted the research into Lieutenant Fox, his career and his deeds in the First World War, with the help of his family. He said: “The family story was that he had been found dead in a church with no mark or scars on him and, in fact, this turned out to be completely true.

“The church where he died was in the village of Audencourt in northern France where a dressing station had been set up for the wounded.“The key issue was that, in the absence of the Royal Army Medical Corps, Lieutenant Fox was ordered to take charge of the medical treatment of the men using his skills as a veterinary surgeon. I’m sure he did his very best under such extreme circumstances but he would have been very ill-equipped.”

Talking more generally about the role of the AVC during the First World War, Dr Watkins adds: “The AVC made very significant contributions to the war effort because there were so many horses and mules deployed. They would have been responsible for a range of tasks from husbandry – and educating other soldiers on husbandry – to the treatment of injured animals.”

In total, some 67 veterinary surgeons are believed to have been killed in the First World War – of whom 34 died from disease, 24 died as a result of wounds and nine were killed in action.

On presenting the portrait, which was drawn by artist Dave Gleeson based on a photograph of Lieutenant Fox, Mr Tierney, from Dublin, said: “I am very pleased that the Royal College of Veterinary Surgeons has accepted this portrait as future generations of vets will be able to see it here and learn about my great grand-uncle’s story.

“He has become my hero because he died while trying to save human lives and, for me, that’s a huge source of pride.

"While his story is very interesting, however, it’s not just about him. There are 66 other names on the RCVS First World War memorial and they all have a story to tell as well.”

Gordon Hockey adds: “We are very pleased to receive this portrait of Lieutenant Fox in recognition of the sacrifice he made during the First World War. The fact that he died while tending to his wounded fellow soldiers demonstrates the caring nature of the profession and the wider contribution to society made by veterinary surgeons.

“In this centenary year I would also like to commend the contribution made by members of the profession as a whole during the war.”

Throughout the centenary the RCVS Knowledge Library blog – written by Clare Boulton, Head of Library and Information Services – will be updated with stories about the conduct of veterinary surgeons in the First World War.