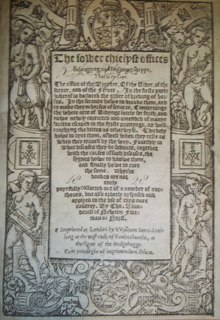 In our Historical Collection is a copy of Thomas Blundeville’s The fower chiefyst offices belonging to horsemanshippe which is considered to be the first significant English book on the management and treatment of horses.

As the title suggests, the book is divided into four parts, which as they each have their own, differently dated, title pages seem to have been published separately before being brought together as one work.

The first part, The breeding of horses, covers some twenty chapters and includes descriptions of the different breeds and types of horse as well as topics such as ‘How to make your mares to conceive either horse foles or mare foles’ and ‘How to helpe a mare that is in danger at the time of her foling’.

The second part, The arte of rydyng, whose title page is undated, is mainly a reprint of Blundeville’s translation of Grisone’s Ordini di Cavalcare  which had first appeared in Italy in 1550,  Blundeville’s own translation first being published in 1560.

The third part, The order of dietynge of horses, is dated 1565 and not only covers feeding but also anatomy, proportions and hygiene. 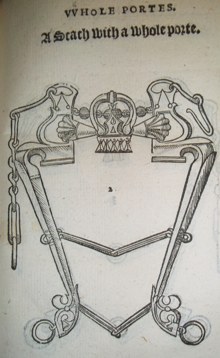 The fourth part, The order of curing horses diseases, is dated 1566.  This is the most substantial section; firstly it explains how to recognise ‘signs’ of disease, then it discusses fevers and pestilence, and the disorders of each part of the body in turn, and finally there is a is a section on The true arte of paring and shooying all manner of hoves.

Blundeville inherited his family’s country estate in Newton Flotman, Norfolk in 1568.  In addition to horsemanship he wrote on diverse subjects such as astronomy and the study of history.  He was also interested in mathematics and his translations of several Italian works suggest that he had travelled in Italy. His patron was Robert Dudley, 1st Earl of Leicester to whom The arte of rydyng is dedicated.

With four editions produced in under fifty years, the book proved enduringly popular, a popularity perhaps not unrelated to Blundeville playing to a sense of national ambition, for example, in stating that in the matter of horsemanship it was possible that the

“gentlemen of this realm would … passe the Frenchmen and all other nations … as they now excel us”.

To view this, or any other book in the Historical Collection, please contact the Library library@rcvstrust.org.uk or 020 7202 0752 to arrange an appointment.