This work was first published in German in 1570 and was later translated into English by Barnabe Googe with the first English edition appearing in 1577. The English copy held in the Historical Collection was published in 1586. 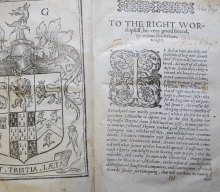 In his epistle to the Reader at the front of the book Googe writes:

“I have thought it meete (good Reader) for they further profite and pleasure to put into English, these foure bookes of husbandry, collected and set forth, by M CONRAD HERESBATCH, a great and a learned Counceller of the Duke of Cleues … and though I haue dealt with many, both Graines, Plantes, and Trees, that are yet strangers, and unknowne unto us, I doe no whit doubt, but that with good diligence and husbandry, they may in short time so be denisend and made acquainted with our soile, as they will prosper”.

The first book deals with earable ground, tillage and pasture; earable ground was ground used for growing crops such as ears of grain – hence the term ‘arable’.

The second deals with gardens, orchards and woods, the third with the feeding, breeding and curing of cattle; and the fourth with poultry, fowl, fish and bees.

The books contain many ‘interesting’ tips on animal husbandry.  In Book three, part 1 the care of the feet is described as the ‘chiefest matter in the horse’  and on lameness it states:

"if a horse thrust out a foot and stand not even it is a sign of some fault in the foot".

In book four, when discussing the relative merits of breeds of fowl, it offers the following advice:

"and though Hennes are more fruitfull in laying of Egges, yet Pigeons are more profitable by often bringing forth young".

and on fish husbandry:

"in the banks and sides of these Ponds, you must have Buthes and Creeke holes, for the Fish to hide them in from the heate of the Sunne".

We also hold a copy of a later edition of this text edited by Gervase Markham and published as The whole art of husbandry in 1631.

To view these, or any other, book in the Historical Collection, or if you have an opinion on whether the care of the feet is the "chiefest matter in the horse", please contact the Library library@rcvsknowledge.org or 020 7202 0752 to arrange an appointment.