This rare copy of ‘The Plan’, of which there are only a handful of known copies, was donated to the RCVS as part of the NR Turnbull bequest in 1983. 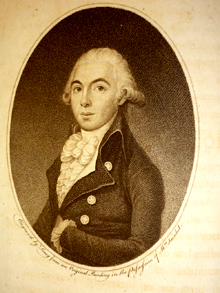 Charles Vial de St Bel (Sainbel) (1753-1793) was a graduate of the veterinary school in Lyon.  On a tour in 1788 he presented a plan for a veterinary school  in England but was unable to generate interest in developing it.

On another visit to England the following year
St Bel met Granville Penn, a prominent member of the Odiham Agricultural Society, who helped him adapt the plan.  The result was published as a 28 page document dated 19 March 1790.

The Plan is divided into two parts: an introduction giving the reasons for creating a veterinary profession, and a section giving practical suggestions for putting this into effect.

It proposed that the institution should be composed of “a college or body, associating for the purpose of encouraging veterinary science, and who should provide a school wherein it might be pursued”.

Lectures should “treat fully and amply of anatomy and physiology; of the veterinary pharmacopoeia; of chirurgical operations” and “besides the anatomical demonstrations on the dead body, lectures should be likewise given in the infirmary over the diseased subject”.

Professors of botany and chemistry would also be necessary to “render the institution a school of complete instruction, in everything that could qualify the mind for making improvements in the new and spacious field, which it would be the object of the college to cultivate."

“Whenever a student should have regularly attended an entire course of study, and should have passed an examination before the college and its professors, he should obtain a certificate in form; and the names and places of abode of persons so obtaining certificates should be inserted every year in the public papers.”

Graduates should be allowed “to express their profession by some initial letters such as A.V.P. ie Artis Veterinariae Prudens; or others to be hereafter agreed on."

to express their profession by some initial letters such as A.V.P. ie Artis Veterinariae Prudens

“Finally; when the college had gained its full consistency it might be formally incorporated by Charter, by the name of, The Royal Veterinary College.”

With the continued support of Penn and the Odiham Society The Plan resulted in the founding of the London Veterinary College in 1791 with St Bel as its Professor.

To view this, or any other, book in the historical collection please contact the Library library@rcvsknowledge.org or 020 7202 0752 to arrange an appointment.