This is the most important non veterinary work in the Historical Collection, which is of great importance for both the study of animal movement and the study of the history of photography and early cinema.

Eadweard Muybridge (1830-1904) was born in Kingston upon Thames, moving to America in the 1850s where he became a successful photographer.

His early works were landscape views of San Francisco and its surroundings, but it is for his photographs of animals in motion that he is most famous. 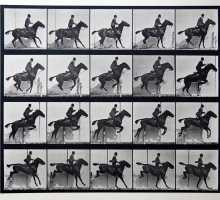 Between 1877-1879 Muybridge developed a technique, using multiple cameras with mechanically tripped shutters, which enabled him to capture the image of a running horse and thus prove that while galloping a horse does, at some point, lift all four feet off the ground.

This was followed up at the University of Pennsylvania in 1884-1887 where Muybridge produced a series of photographs of men, women, horses, cats, dogs, birds, etc in motion. These were then published as a series of 781 plates called Animal locomotion.

Only a small number of the complete sets of all 781 images, in 11 volumes, were produced. Instead a prospectus and catalogue of plates was produced in 1887 inviting subscribers to select "One Hundred Plates, as described in the prospectus; at the subscription price of ONE HUNDREDDOLLARS for each copy, payable upon the delivery of the work."

The minutes of the RCVS Library & Museum Committee for 6 April 1892 record that the copy of Animal locomotion, held in the Historical Collection, was purchased for £22 8/-.  It contains a total of 107 plates, including 67 plates of horses in motion. The remaining 40 plates cover mules, oxen, goats, dogs, cats, elephants, camels, baboons, cockatoos, ostriches and storks.

To view this or any other book in the Historical Collection, please contact us at library@rcvsknowledge.org or 020 7202 0752 to arrange an appointment.

Copies of a selection of Muybridge’s works including the Prospectus and Catalogue of Platesfor Animal locomotion and a selection of the plates can be found on the University of Pennsylvania website.