Carlo Ruini was born into a wealthy family in Bologna, Italy.  His most famous work on Anatomia del cavallo, infermita, et suoi rimedii which translates as The anatomy of the horse, diseases and treatments was first published in 1598 two months after his death by his son.   Later editions of the book followed in 1599, 1602, 1607 and 1618. 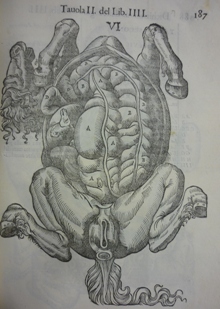 Anatomia del cavallo is in two volumes: the first covers the anatomy of the horse, the second deals with diseases and their treatment.  It is lavishly illustrated throughout with magnificent woodcuts, an example of which can be seen on the right.

The section on anatomy is divided into five books: ‘animal parts’ (which covers the head, brain); ‘spiritual parts’ (neck and chest); ‘nutritive parts’ (abdomen); ‘generative parts’ and finally the muscles and skeleton.

Major-General Sir Frederick Smith in his Early history of veterinary literature says of this section:

“It was at the hands of Ruini that the subject of equine anatomy jumped at a single bound from the blackest ignorance to relative perfection”. ⊃1;

The second section deals with equine diseases and is again divided into a number of books.  Smith is less enthusiastic about this part saying:

“The portion of Ruini’s work dealing with diseases leaves the impression that he was a better anatomist than clinician”. ⊃2;

Ruini’s work was never translated into English but Andrew Snape in his Anatomy of the horse of 1683 took Anatomia del cavallo as its basis including copies of several of the plates – in reverse. 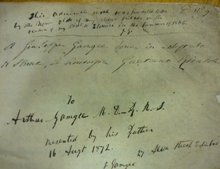 In our Historical Collection we have a copy of the 1618 edition which was published in Venice.  An inscription at the front of the book shows that it once belonged to Arthur Gamgee, a member of the well known veterinary family.  It was presented to him in 1872 by his father Joseph Gamgee who had in turn received it from the ‘oldest of his Italian friends …[during a] visit to Florence in the Summer of 1865’.  Click on the photo above to view an enlarged version.

To view this, or any other book in the Historical Collection, please contact the Library library@rcvsknowledge.org or 020 7202 0752 to arrange an appointment.