John Roalfe Cox graduated from London Veterinary School in 1849 after which he studied human medicine becoming a member of the Royal College of Surgeons.  Eventually Cox set up a practice near Grosvenor Square which rapidly expanded until by 1870 it was one of the largest, and most lucrative in London. 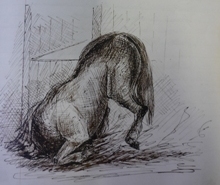 “For many years [he] kept note-books in which he entered very fully the history and treatment of all his most interesting cases…He was a clever pen-and-ink draughtsman, with a neat turn for caricature."

We are fortunate to have in our collection a number of these notes books which record his equine casework.  In a book labelled ‘Clinical sketches of horses in accident and disease’ there are sketches to illustrate a strangulated bowel, strangulated hernia and a ruptured stomach.

In a second book labelled ‘Horses in accident and disease - notes on special cases’ there is a description of a case of ‘coup–de-soleil’ which Cox encountered in the ‘exceedingly hot summer of July 1858’.

He reports his attempts to soothe the horse through the application of cold compresses, at first these appeared to be beneficial but the horse got worse ‘frequently pitching forward’ and ’falling over again as soon as he got on his legs’. Cox ends his account thus:

"I felt no doubt of it being a case of sun-stroke…he had to be destroyed the following day.”

This case is accompanied by an illustration of the horse pitching forward as shown above. 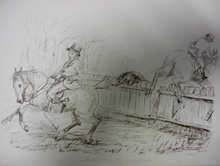 We also have a book of Cox’s illuminating caricatures which contains depictions of a variety of rural scenes including a number showing hunting. One of these labelled ‘Confusion of purpose’ shows a huntsman going in the wrong direction is shown here.

If you want to see more of these fascinating illustrations, or if you have your own drawings of cases that you would like to share, please contact the Library at library@rcvstrust.org.uk or 020 7202 0752.