Alistair Aynsley Clarke (1918-2014) was interviewed by Sue Bradley between November 2011 and July 2012. His full-length life story recording of nearly 25 hours will be permanently accessible in the dedicated collection established by the project at the British Library. 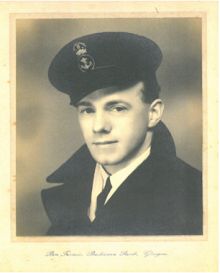 In the recording (listen to extracts below), Alistair Clarke describes his early life and education in Dumbarton, including the efforts his parents made to enable him to go to Glasgow Veterinary College, where he started his training in 1937. His father, Thomas George, a marine engineer at Denny’s shipyard, worked as bookkeeper in the evenings to raise the fees, helped by Alistair’s mother, Margaret (née McLintock), a dressmaker by trade. (Photo on the right: Alistair Clarke, 1940)

His studies were interrupted by the Second World War, when he served in the Royal Navy as a radar mechanic and was seconded to the Free French Navy. He survived the sinking of his ship, FFS La Combattante, by torpedo in the North Sea, returned to college after the war and qualified from Glasgow in December 1947.

On 3 January 1948, Alistair Clarke began his career in Newcastle upon Tyne as an assistant in the practice of Davidson & Christopher. After Frank Christopher’s retirement, the business merged with a neighbouring practice to become Blythman, Clarke and Bewsher. He retired as a partner in 1983 but continued to work part-time for the practice until 1988.

Alistair Clarke’s recording includes recollections of his experiences in this mixed town-and-country practice, from the dog tracks and cattle markets of the city, to farm visits in the surrounding countryside, and looking after pit ponies in the Northumberland coal mines. 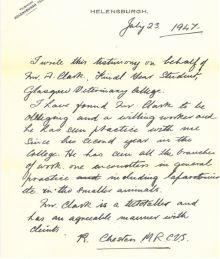 He also describes the vets with whom he saw practice: Bill (later Sir William) Weipers, the pioneering small animal surgeon who became the first Director of Veterinary Education at the University of Glasgow; and Bob Chesters of Helensburgh, whose mixed practice reached north to the start of the Highlands. (Photo on the right: reference from Bob Chesters, 1947. Click on the photo to view an enlarged version)

Alistair Clarke developed a special interest in dairy cattle, and found his work with farmers in Northumberland to be one of the most rewarding aspects of his career. He recalls the importance of his early agricultural experience: learning to milk on a local farm as a boy, to work horses on an arable farm at Kippen in Stirlingshire before the war, and lambing ewes in Hexhamshire, on a farm that belonged to relatives of his father.

It was at Kippen where he watched a vet attending a Clydesdale and decided he would like to be a veterinary surgeon himself. It was here too, at a dance in the village hall, where he met his future wife, Margaret Kay, then a student nurse at Glasgow Royal Infirmary. As he recalls in his recording, her medical training and knowledge of farming was invaluable to their veterinary household. (Photo on the right: Alistair and Margaret on honeymoon in London, 1948)

Alistair and Margaret Clarke had three sons, one of whom also became a vet. It was Kenneth (qualified Liverpool 1978) who nominated his father to make this recording for Veterinary Lives in Practice. Sue Bradley asked him why

Listen to extract 1: reflections on making the recording and on his veterinary career (3 mins)

Have you seen the Early interviews from Mary Brancker, and Pamela and Tony Owen?

Copyright in these recordings is held by jointly by the British Library and the Centre for Rural Economy, Newcastle University.